You Cannot Run a Public Service like a Business, and Here’s Why

One of the greatest myths of our time is that public services can be made more efficient if we run them as businesses.  The commercialisation of our public services has been a manifest failure, and the response offered by the mainstream parties is that we simply haven’t commercialised them enough. What they fail to understand is that a public service and a business are inherently different beasts and asking one to behave as the other is like asking a fish to ride a bicycle.

What is a Public Service? 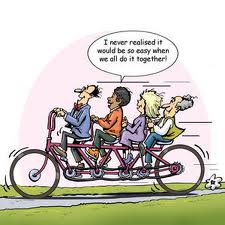 The primary aim of a public service is to provide a service to the public.  This service exists to avoid negative social impacts and protect crucial social utilities from the instabilities of capitalism.

Within living memory it was considered basic common sense that essentials like food, water, energy, access to health services, housing, sanitation and sewage, social care and core manufacturing industries were too important to expose to the volatilities of the free market.  Aside from this practical view, there were also two core value statements:

1)      A person or entity should not seek to profit from a person’s need to eat, heat their homes, drink water, be treated when sick or have a roof over their head.

2)      A person’s access to such necessities should not be based on their ability to pay.

Public services are democratic.  If a service fails to deliver our needs we can hold those responsible to account at the ballot box.  Important matters like wages, pensions and working conditions are the result of negotiation and subject to internal and popular support.

Public services are funded by public money, paid to public workers, managed by public representatives working together to deliver social utility – every penny put in recycles within the public economy.

Neoliberal Capitalism is inherently unstable, creates inefficiencies and gaps in supply and demand, and does not create full employment.  For these three reasons, critical services must be independent of capitalism, commercialisation and profit.  In short, they must be universal and eternal.

This is the purpose of a public service.

What is a Business? 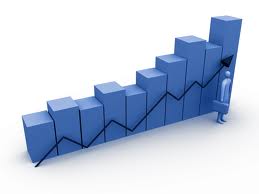 A business is a commercial entity.  The primary responsibility of a business is to create a profit for its shareholders.  A corporation may well have other aims, but all must be subservient to this primary aim or the corporation will cease to exist, or be taken over by another corporation.

A business is not a democratic organisation. Businesses are hierarchical and wages, terms and conditions are set by the executive and subject to the market.  This can be mitigated to some degree by collective bargaining through unions, but workers in the private sector has historically delivered lower wages and reduced working conditions for the bulk of its employees. The numbers speak for themselves:

Public sector employees are paid on average between 7.7% and 8.8% or £86 a week more than private sector workers.  More significantly, this is a twelve year high in the wage gap, as private sector wages continue to fall in real terms.

The public purse is picking up the bill for the wage and conditions gap in the form of large increases in state benefits paid to working people.  As the current coalition government remove these compensations, the failure of businesses to pay a living wage, together with clear provision for old age and care needs is exposed. 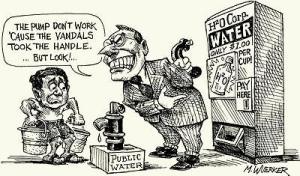 The privatised energy market has provided six energy giants, who dominate the market and have continued to deliver above inflation price rises whilst making record profits each year. The UK now rests at the very bottom of the league tables, with the worst fuel poverty in Western Europe.

The privatised railway is an example par excellence of total lack of accountability for failure to deliver.  The rail service is, as always failing to raise sufficient ticket revenues to turn a profit.  Ticket prices are rising above the rate of inflation.  Train firms give the government £1.17bn in premiums to run their franchises, only for the government to hand them back £4bn in subsidies. So, instead of spending £140m in 1960’s money for a fully nationalised service where costs were kept low.  We are now spending almost £3bn a year today simply to fund the profits of private companies.  Network Rail profits doubled in 2012, and all rail franchises are running at a profit as the companies prioritise (as they have to, as businesses) making a profit rather than lowering ticket prices or investing in the network.  Despite all this, the government are not complaining as they were when the service was nationalised, of a loss making service.

The move away from a social housing policy during the Thatcher government and continued since has been a disaster for housing.  We are building 100,000 homes a year less than we need because the housing supply has been almost entirely handed over to the private sector to manage. The National Housing Federation issued a report last year which showed Housing Benefit has doubled in recent years as a direct result of an astronomical increase in housing costs.  The report shows an 86% rise in housing benefit claims by working families, with 10,000 new claims coming in per month.  House prices are now 300% higher (in real terms) than in 1959.  If the price of a dozen eggs had risen as quickly, they would now cost £19. Rents across the UK have risen by an average of 37% in the UK in just the last three years.

The list could continue to include care, employment support services and a litany of other failed attempts to commercialise public services. The project is doomed.

There is No Such Thing as a Loss Making Public Service

If a business fails to recoup the costs of providing its service in money, it is described as running at a loss.  This language of business is now being applied to our public services.  When Dr Beeching dismantled the railways in 1963, the narrative then and now was that the rail network was losing £140m a year.  This is commercial speak.  This means the gap between ticket revenue and costs to run the service was £140m.  If the railway was a business, this would be a loss.  But it was a public service.  A well funded, serviceable, cheap at the point of use railway service was and is an important social utility.  We need to be able to get our people around to work, to keep connected to family and friends, to transport goods up and down the country.  So we all pitch in taxes and through an economy of scale we run a cooperative service.  Unless someone is stealing, defrauding or otherwise ‘disappearing’ public funds, then there is no such thing as a loss making public service.  The gap between ticket revenues and running costs in this case could have been entirely expected, since the priority was accessibility and maximum utility of the service.  This idea is anathema to business.

The Gulf Between Social Efficiency and Cost Efficiency 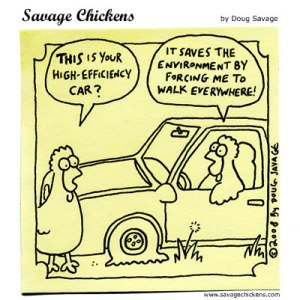 The primary concern of the Public Service should be social efficiency; otherwise it is rendering itself obsolete.  It is not cost efficient to provide post offices in villages, free meals and milk in schools, small local hospitals and local doctor surgeries.  The commercialisation of these public services demands they strip out unnecessary costs.  But from a social efficiency perspective these are good ideas. If amenities are removed from villages they become unviable. Hungry, malnourished children struggle to learn and are more likely to suffer behavioural problems, so free school meals and milk alleviate this.  Localised health services will be more easily accessible, personal and responsive to local people.

What is the point of a profit making hospital if health conditions in its catchment area are plummeting because access to services is limited or quality is so low that patients are more likely to die or suffer recurring conditions?  The hospital is a viable business, but a failed public service.  If we compare the performance of the UK’s public health service and the US model of private medical insurance, we see just such results.

Every UK resident is guaranteed medical treatment if they are sick, regardless of ability to pay and this is funded through general taxation. Private medical insurance is available in the UK, but is used by only 8% of the population.

Whilst the US is a world leader in research (where the money can be made), 52 million Americans are without health insurance and face the choice between crippling medical bills or no access to treatment. As a result, 62% of personal bankruptcies in the US are the result of medical costs.

The US has fewer physicians to patients and fewer beds than most OECD countries, the UK included.

The World Health Organisation ranks the UK  18th for overall clinical outcomes, while the US languishes in 37th (below Dominica, Morocco and Saudi Arabia).

This case also demonstrates how cost and social efficiency are not always mutually exclusive.  Despite such an indefensibly poor service, the US is the most expensive healthcare system in the world. The UK spends just 9% of its GDP on healthcare with a decade of downward trend, while the US pays 18.2%, increasing tenfold since 1980.

The issue of social efficiency is entirely missing from the policies of all mainstream parties.  It is simply assumed that commercialising a service will inevitably lead to cost efficiency and that this is somehow equal to social efficiency.  This is muddled thinking.

It is clear that a business is not created to deliver a public service, and a public service is not intended to be a business.  They are different beasts.  Yet, ever since Thatcher it has been the policy of the British government, and governments around the world to make them one and the same.  This policy is so flawed that one must come to the conclusion that those committed to it are not seeking social or economic efficiency.  Instead, they have an ideological commitment to marketisation – with social and economic progress as a lesser consideration.

65 thoughts on “You Cannot Run a Public Service like a Business, and Here’s Why”