ATOS, the firm contracted by the UK government to perform ‘Work Capability Assessments’ on the entire population claiming incapacity benefits are never far from controversy. But the firm have now been found to have called in police in efforts to prevent welfare experts advising the sick and disabled people undergoing assessments, adding credence to claims that a meeting with ATOS is simply a ‘computer says no’ scenario.

Atos didn’t just enter with the Coalition.  They have been the sole provider of medical assessments for the DWP since 1998.  While Atos is the bulldog, it is the ministers of the DWP who hold the leash – and this government have given a firm order to attack.

The government has mandated that every single person claiming social security payments for sickness or disability undergo a work capability test with Atos, to determine whether they could really be working.  The clear implication being – these people could really be working. In fact, ministers have not merely implied it, but propagandised about it until many people believe it was benefit fraud, and not the Bank Bailout which caused our sky high debt. 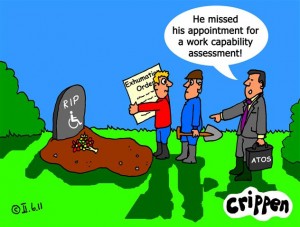 The government’s own statistics show that between 2010 and 2011 10,600 sick and disabled people died within six weeks of their Atos assessment. This is 204 people a week, or 29 people a day. 2,200 of these people died before finding out if they were still entitled to their social security, and an astonishing 1,300 had been declared ‘Fit to Work’ by being placed in the Work Related Activity Group. These people spent their final weeks alive being harassed by the Job Centre, answering pointless questions, and fretting over late payment notices and threats of eviction as their social safety net was ripped away.

As this horrific figure of more than one person every hour is almost too large to conceive of, here are some names among that number.

Linda Wootton, 49, was on 10 medications a day after a double lung and heart transplant.  She was weak and suffered regular bouts of blackouts.  She was put through the Atos Work Capability Assessment and as she lay in a hospital bed dying, she received confirmation she was ‘fit to work’.  She died just nine days later.  Her husband Peter said:

“I sat there and listened to my wife drown in her own bodily fluids. It took half an hour for her to die; a woman who is apparently fit for work”.

Brian McArdle, 57, had been left paralysed down one side, blind in one eye, unable to speak properly and barely able to eat and dress himself after a stroke on Boxing Day 2011. Despite this, he was deemed ‘fit to work’ by Atos.  He died of a heart attack the day after his benefit payments were stopped.  His thirteen year old son Kieran told the Daily Record:

“Even though my dad had another stroke just days before his assessment, he was determined to go…He tried his best to walk and talk because he was a very proud man, but even an idiot could have seen my dad wasn’t fit for work.

Colin Traynor, 29, suffered from epilepsy.  He was deemed ‘fit for work’ by Atos and forced to enter a lengthy, bureaucratic process to appeal the decision – during which his benefits would be frozen.  He did not live to see the result of his appeal.  Five weeks after his death, his family received the news that his appeal was successful.  Too late for Colin.  His father Ray said:

“I firmly believe – 100% believe – that the system this government introduced has killed my son.”

At the rate at which people are dying – these three people represent the death toll in just the last three hours.  This is not just some occasional poor decisions, this is a Linda, a Brian, or a Colin, every hour, all day, every day, dying because this system is designed to throw people out of the social security system – whether they need it or not.

And now…Not Even Advice is Allowed 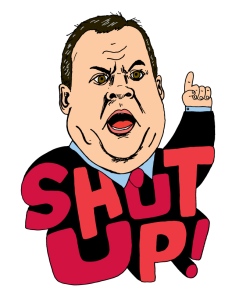 In the face off all this, one claimant invited Wirral Councillor Joe Walsh and Welfare Expert Terry Craven to attend his ‘Work Capability Assessment’.  The ATOS assessors refused to conduct the assessment with either of them present, even though claimants are allowed to bring a person into the room.  ATOS workers then called the police claiming the two were ‘threatening and upsetting people’.  Ironic, given the behaviour of the company themselves.

“We were just advising people before they went into their medicals of what they should be aware of.

Police arrived to Mann Island expecting a ‘demonstration’ but found two men handing out information leaflets. A Merseyside police spokesman confirmed no-one was breaking the law when officers arrived at the Port of Liverpool building.

Seriously ill and disabled people up and down the country are being harassed, literally to their deaths, by this horrendous excuse for an ‘assessment’.  It is not an assessment if the outcome is predetermined by a quota.  The government continues to claim it hasn’t set ATOS any target for kicking claimants off benefits – yet multiple investigations have revealed ATOS are applying a quota system internally, with assessors rewarded for declaring more people ‘Fit to Work’, and penalised for not.  The firm would have no cause to behave this way (and have not during the rest of their fourteen years conducting the assessments) without a clear steer from the State.

This simply has to stop. Atos will receive £206m this year to conduct these assessments, while their boss earns a cool £2.3m.  The boss’s wage alone could fund maximum benefit for 334 people too ill to work.

If the measure of a civilisation is the manner in which it treats its weakest members, the UK is regressing to the Stone Age.

PLEASE take a moment to support the Scriptonite CrowdFunding Campaign – we can have the media we want, but we need to build it together.

Join the WoW Campaign – Help stop the War on Welfare