UK Courts to be Privatised, This is Not Satire 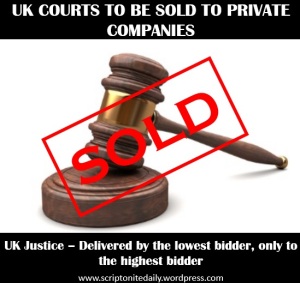 Today’s front page of The Times newspaper was issued ahead of time yesterday evening, bearing the headline ‘Courts to be privatised in radical justice shake-up’.  While many hoped it was a late April Fool or a piece of over-zealous reporting, closer investigation suggests these hopes were futile.  The UK Government has once more chosen to pillage a public service in the pursuit of private profit.  These changes, in combination with other privatisations and cuts, will result in a two tier justice system – or justice to the highest bidder alone.

The Privatisation of our Courts

These plans have been entirely closed to public debate.  In fact, there has been only one public reference to this fundamental overhaul of our justice system.

Chris Grayling, Minister of Justice, made an oblique reference to a review of the justice system in remarks to parliament this March:

“The courts and tribunals are at the centre of our justice system, relied on by the public to enforce their rights and uphold the rule of law. As in other areas, we need to look at the way we deliver our services to provide a more efficient service that delivers access to justice quickly and effectively, while delivering value for money for the taxpayer. At the same time, we must preserve the independence of the judiciary, which lies at the heart of our constitutional arrangements.”

According to The Times report today:

“Courts in England and Wales are facing wholesale privatisation under revolutionary plans that would end the system that has existed since Magna Carta. The idea would establish the courts service as a commercial enterprise, paying its way and freed from Treasury control, with court buildings and thousands of staff put in the hands of private companies. It would save the Ministry of Justice £1 billion a year.”

“Chris Grayling, the Justice Secretary, instructed officials this year to explore plans for reform to ensure that the Courts and Tribunal Service provides value for money.

A paper outlining options is expected to go to Mr Grayling within two weeks, with a tight timetable for action under which the shake-up could proceed this autumn. The plan is strongly backed by the Justice Secretary.

Options under discussion include hiving off court buildings to a private company, which would run and maintain them, or a more radical proposal in which the 20,000 courts staff would also transfer to the private sector.”

The Guardian immediately followed up with a quote from the Ministry of Justice claiming that “The proposals being considered are not the wholesale privatisation of the courts service.”

These claims come as nothing new to those who were raising alarms about the Health and Social Care Act, the Welfare Reform Act or other pieces of government legislation.  The government has continued to insist that its reforms do not amount to privatisation, in contradiction with the facts.  These plans, as others before them, are the concluding acts of the piecemeal privatisation of our legal and justice services. 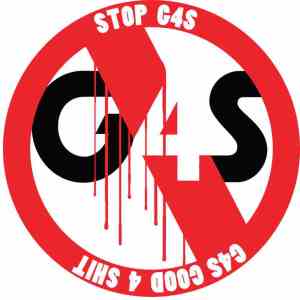 The inexorable rise of private security giant G4S tells the tale of UK justice outsourced to the lowest bidder.

In 1992, G4S became the first private contractor to run a state prison – taking over HM Prison Wolds.  Since then G4S have been allowed, by successive governments, to quietly buy up large tracts of our formerly public police, security and justice sector.

G4S have been expanding their control of the police service since the mid 90’s and now manage:

Large portions of the forensic service

Since the early 90’s governments have contracted out the build and management of prisons to the private sector.  At present, there are fourteen such prisons out of 139 prisons in the UK.

G4S now run 6 of Her Majesty’s Prisons, including HMP Altcourse which was the country’s first PFI prison, yielding even greater profits for G4S.

G4S pioneered the ‘Working Prison’ where inmates work a 40 hour week for next to nothing for private corporations such as engineering firm, Norpro.

G4S currently monitors 40,000 people in the UK every day.  It provides electronic tagging, voice verification and satellite tracking on behalf of the Ministry of Justice and the UK Border Agency.

They also design and building monitoring services and sell them back to government.

G4S run two Immigration Removal Centres – these are effectively prisons in which to hold migrant families and individuals ahead of deportation.

This year, G4S was allowed to profit from rape.  The government has commissioned G4S to run two support centres supporting victims of rape and sexual attacks in the West Midlands.  These sexual assault referral centres, in Castle Vale and Walsall, provide a range if support services for the victims without them having to contact the police.

According to charity Rape Crisis, 85,000 are raped, and more than 400,000 sexually assaulted every year in England and Wales.

Men, women and children who have faced the personal tragedy of rape or sexual assault are being turned into a source of profit for one of the worst offending corporations in the UK.

This is the amount of our justice system farmed out to just one company, but others, like Serco are also in on the racket.  Private security firms are being invited to a feast on tax payer money. The government has already closed down and sold off more than 100 magistrates and county court buildings since taking office, and part of the courts debt collection service has already been outsourced to private firms to run for profit.

While justice is increasingly being delivered by the lowest bidder (despite their fitness to deliver), concomitant cuts to Legal Aid mean justice will increasingly only be delivered to the highest bidder. 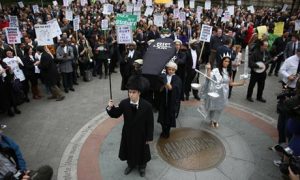 Chris Grayling is seeking to cut £220m from the Legal Aid budget, put in place to ensure open and equal justice for those unable to pay.  This article from Zoe Williams in the Guardian makes the case against these cuts perfectly.

Last week, more than 500 members of the legal and justice professions took part in a protest outside parliament against the proposed cuts.  High profile supporters included Baroness Helen Kennedy QC, who said:

“This plan is about creating public defenders who will be chosen by the state to represent you,” she said. “This is disgraceful. How much money is being spent from the public purse on defending this government? How much money was Jonathan Sumption QC paid to represent Tony Blair at the Hutton inquiry? These changes will mean many more miscarriages of justice.”

Yet Grayling’s plan rolls on pretty much uncontested through the House of Commons, as our advocates are frozen out of the process.

Profiting from Justice Does not Work 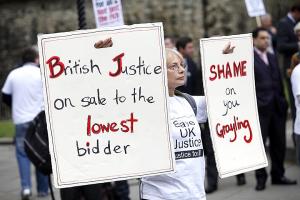 Human Rights Lawyer and cross bench peer, Lord Pannick, speaking of new plans for justice said “In principle I would be very concerned about whether the driver of economic efficiency in a privatised system would be compatible with maintaining the independent administration of justice.”

A quick look at the performance of private providers in our justice system encourages us to heed Lord Pannick’s warning.

Just last week the MoJ was forced to open an inquiry after it was revealed G4S had overcharged for their electronic tagging service, costing the taxpayer millions.

The court translation service is in crisis after outsourcing to ALS as part of a radical cost cutting exercise.  Around 1,000 translators have simply not turned up to court, resulting in costly trial delays. Prior to the privatisation, translators were chosen directly from the National Register of Public Service Interpreters and was the envy of Europe.

The government also closed down the Forensic Science Service, leaving the critical issue of forensic science to private, profit making firms.  Not only is closure of the service estimated to cost the taxpayer £350m (3 times the government’s initial forecast), but more than three quarters of UK forensic scientists responding to a New Scientist study believe the decision will lead of miscarriages of justice.  These fears are not misplaced.  In March this year an investigation began into private forensics firm LCG, after a contaminated DNA sample provided by the firm saw a man jailed for rape in a city he had never even visited.  This inquiry means all judgements reliant on forensic evidence processed by LCG will need to be reopened and reviewed.  We face high costs, both human and financial, for handing such critical services over to the private sector.

Despite this litany of failure (and the list above is by no means exhaustive) the quest to sell our services continues apace.  The whisper of opposition put up in parliament and the public sphere has thus far been akin to blowing into the faces of rampaging wildebeest.  If we want a justice system left, we must do better.

Join the Campaign to Save Legal Aid

Support the Haldane Society’s campaign to Save Legal Aid

34 thoughts on “UK Courts to be Privatised, This is Not Satire”